In 1996, someone found some very old clothes in an old mine in Nevada, USA; they included a pair of dirty old jeans. Today, those jeans are very valuable, and they are now in the Levi Strauss Archival Collection, in San Francisco. The jeans, which are over 140 years old, are the oldest pair of Levi’s 501 jeans in the world.
They are almost the same as a modern pair of 501’s; there are just some small differences in the detail. For instance, today’s 501’s have two back pockets, the old pair just has one.

THE STORY OF JEANS 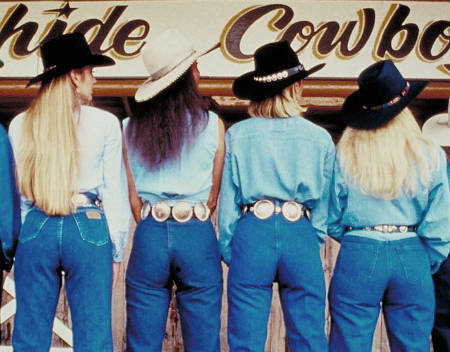 Jeans were the classic clothes of the American West.
In 1853, a young tailor from Germany, called Levi Strauss, began working in San Francisco; Levi sold thick ՀԱՍՏ canvas to miners; the miners used the canvas to make tentsՎՐԱՆԵ.
One day, a minerՀԱՆՔԱՓՈՐ told Levi that he could not find trousers that were strong enough for work in the gold mines. Levi decided to make some trousers out of canvas.
Very soon, he had sold all the canvasՔԱԹԱՆ trousersՏԱԲԱՏ he had made! They were just what miners wanted.
However, the canvas was ratherԲԱՎԱԿԱՆԻՆ heavy and stiffԿՈՇՏ. Levi thereforeԱՅԴ ՊԱՏՃԱՌՈՎ began to look for a different textile; soon he found a heavy textile from France; it was called serge de Nimes. Americans just called this de Nimes, and this name soon got reducedԿՐՃԱՏՎԵԼ to denim.
Denim was a bit lighter than canvas, but it was very strong; it was ideal for miners.
However, original denim was almost white, and miners did not like the color! Their denim trousers got dirty as soon as they began working!

Levi Strauss therefore decided to use colored denim, and he chose dark blue. In 1873,he began to make denim trousers with metal rivets to make them stronger. This was a radical new idea: «Blue jeans» had arrived!
Levi’s jeans were so popular, that his company got bigger and bigger; soon, other firms were making blue jeans too. Miners liked them, but so did cowboys and other working men. Blue jeans became classic American working trousers.
After the Second World War, jeans became popular all over the world. Today, blue jeans are made over the world – most of them in Asia. Very few jeans are now made in the USA, because of the costԱՐԺԵՔ: but it is still possible to buy blue jeans that are made in San Francisco…. if you have a lot of money to spend.
Today there are hundreds of different brands of jeans. Many top fashion brands, like Armani or Benetton, make their own blue jeans. But for real authentic jeans, «Levi’s» are still the most popular brand.

In America, everyone wears jeans as leisureԱԶԱՏ  wear. Some people wear jeans all the time, even for work. But Americans are perhaps less formal than other nations.
At the «G7» summit in Denver, in 1997, American President Bill Clinton gave all his visitors jeans, for a «Western evening». Tony Blair, the British Prime Minister, put them on, but other European leaders, including Chancellor Kohl of Germany and Jacques Chirac, the President of France, refusedՄԵՐԺԵԼ. Some people still think that jeans are not respectable clothes!
Not the young! Jeans are now the international uniform worn by young people. Why? That is a good question!